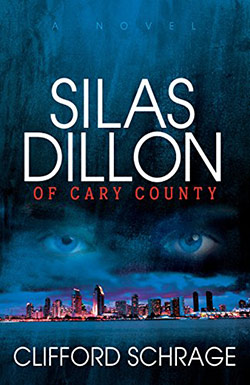 Cary County Hospital was warm on my birth night, while Cary Island, lashed by a below zero wind chill down from Canada, froze outside. Its grassy bedrock was wrapped with a hard coat of snow. My birth mother Maureen heard the wind's shrill moan while she herself moaned in pain. My arrival came on a moonless starry night, late, January thirty-first, minutes shy of February.

Her cervix was open, her back aching. My father wasn't there to help her, to rub her back and comfort her, to talk with her, or pray with her. She didn't know which of the twenty or so men she'd embraced that month nine months earlier was my father.

Hours passed and Mommy was wheeled into the delivery room where all those vital provisions were.

"Not much longer," Dr. Cohen said.

Jill the kind nurse on duty helped prop her up in that big chair so her muscles could push me out easier.

"Your first baby Ms. Dillon?" she said. Her youthful energy moved about the room, working as she spoke.

"How old is your other child?"

"So he'll have a brother to play with."

Maureen groaned in agony, shouting with a contraction. Sweat beads erupted on her forehead, descending, collapsing down her cheeks. "Had to give him up." Tears erupted from her eyes, descending, sinking with suddenness, dripping, mixing with her sweat. "For adoption." She looked across the room avoiding both of their eyes.

"Must have been very hard to do Ms. Dillon." This young nurse didn't pause from working. "Sometimes it's the most loving though." She wiped Maureen's face with a damp cloth, tenderly, now avoiding talking, not wanting to bring other pain.

Silence—only the sterile clinks and thin echoes of the delivery room, a cough from Dr. Cohen. Maureen braced against another contraction, breathing, straining, hollering. Water broke, gushing like tide. Her loud hollering embraced the room, seizing everything. It would be soon.

"He's in Connecticut I think. In the country—a quiet town somewhere." Maureen stared at the blackness of the window as though looking toward Connecticut, out at the black color of glass, at the darkened reflection of the room on glass.

She felt that compelling pressure, suddenly an urge to push, and she hated this arduous work. She screamed; she cursed. My head moved down in the typical, little by little way with each contraction, down the narrow passage, from the warm world of the safe womb, to the astonishing opening where this shocking, offensive world is.

"What kind of night is it?" Maureen squeezed this out amid her pushing.

Jill didn't want Mommy's thoughts to digress too much now. She wanted her to focus. "Well, it's cold. Temperature dropped. It's windy. Hear it?" Maureen nodded. She could hear the wind.

Outside, on the other side of the large, dark, reflecting window, the cold gripping wind swirled across the starry, winter-sweetened coast. The falling tide roared, squeezing and thrashing and white capped, bloated between Cary Island and the mainland, surging swollen, rushing reluctantly and pushed under the two-mile bridge, through the deep, ice-banked, narrow strait out from New York Harbor into the cold, hostile Atlantic. This strong watery gush, governed by the clockwork of the veiled moon, shouldered its way with the force that once pushed aside the land, reshaping even its firm bedrock foundation.

"Here's the head," Dr. Cohen said, clasping my head and frame with firm and gentle palms, with sensitive, reactive fingers.

A minute later I slid out, big and blue and shining. I then began to cry, screaming out loud in the normal way. I was held and shown to my mother. "A boy," Jill said.

Mommy did not smile. The doctor cut the umbilical cord—that huge detaching stride away from my mother. There was no pain

I altered into the lovely, soft pink, and I was wrapped in a warm, white towel. Maureen didn't reach her arms for me. She was tired. There was no dad to walk me around in his arms, to kiss me and talk to me. But this tender nurse Jill held me and talked to me for a few minutes, and she kissed my small head. Then I calmed and rested.

No one lied to me yet.

The next day Maureen held me for an hour, and she fed me. I loved that. I loved her. Her voice sounded similar, yet dissimilar from the way it sounded when I lived inside of her. It was clearer, closer. "Silas. Silas," she kept saying. She named me Silas, which means "to borrow." She tried hard to make contact with my eyes. She named me after her grandfather, Silas Rosenberg—a tough, hardy, hardened Jew who'd come to New York from Europe, whom she could only faintly recall from her own hard, untidy childhood.

"Silas. Silas," she kept saying. I wanted to linger here, to remain close to her, but something troubled her. She was restless.

She kept shaking, rising, pacing, standing by and staring out the window. She was sweating, clutching her fingers, folding her arms. Sometimes she held her hair in her fists. She cursed. She cried, biting her nails, her knuckles. That gnawing, narcotic craving in her mortality had plainly become a colossal, gripping incubus which refused to release her.

On the second day she got herself dressed, signed papers with the foster care agency, and left me. She hastily paced out of the warm hospital into the sunny, long-shadowed winter suburbia of Cary County, deserting me, cutting the cord of our bond more deeply, scarcely glancing back. She thought to herself that it would be temporary.

I lay, without knowing what I waited for.